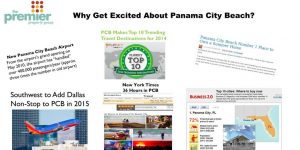 Have you been thinking about buying a condo in Panama City Beach? Have you asked yourself is it too late to get a great deal on a waterfront vacation home?  Panama City Beach, aka,  “PCB”, is located in the Panhandle of Florida and consists of nearly 30 miles of white, sugar sand beaches and emerald Gulf waters.   It has won numerous awards including claims to the title of “World’s Most Beautiful Beach”!

Until 2006, Panama City Beach had always been thought of as a sleepy little beach town that was primarily a summer vacation destination for southern families living within easy driving distance.   All of that changed in 5 short years when most of the small “mom and pop” hotels were replaced with more than 25 luxury high-rise beachfront resorts, a brand new airport servicing both Southwest and Delta was built, a mega shopping/entertainment/dining complex called Pier Park was completed, and tourism almost doubled.

So, is now a good time to invest in Panama City Beach?  If you are looking to purchase your own reasonably priced vacation condo or beach house on one of the most beautiful beaches in the U.S., I  certainly believe so and here are some more reasons to give it your consideration:

You can check out my Beach TV commercial now on YouTube which discusses "Why Invest Now in Panama City Beach":